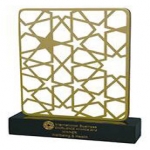 The Awards were hosted by Awards International in partnership with companies such as Dubai DED, Cranfield School of Management and Sharjah Tatweer Forum. The Ceremony was also attended by His Excellency Sami Al Qamzi, Director General of the Department of Economic Development in Dubai.The International Business Excellence Awards recognise business excellence from around the world with the Finals and Awards Ceremony, taking place at the Jumeirah Creekside Hotel in Dubai on May 17th and 18th 2016, being the culmination of an engaging and exciting awards journey for all of the participants.

The Awards aim to support organisations and businesses as a vehicle for sharing best practice and for promoting continuous improvement, learning and personal development.Sir Ronnie Flanagan, Chief Advisor to HH Sheikh Saif Bin Zayed Al Nahyan, Deputy Prime Minister and Minister of highlighted the importance of recognising excellence from companies within and beyond the borders of the UAE.

Competing against the region's most prominent companies from diverse industries, NMC Royal Women's Hospital won an award in the Wellbeing and Health category. NMC Royal Women's Hospital has won the prestigious Wellbeing and Health Award at International Business Excellence Awards 2016. The awards are designed to recognize business excellence across the world and it provides companies with opportunities to showcase and gain recognition for their hard work.